Are you looking for Asia cup Match 2 Srilanka vs UAE Match preview and Live Streaming? One of the Big team, Sri Lanka starts their First match on Asia Cup T20 2016 with the United Arab Emirates. It’s not simply as an easy game and also not a tough one for Sri Lanka. The opposition team, UAE joined in this row by defeating Afghanistan, Hong Kong and Oman in the qualifying tournament with the record of seven wickets by Right-arm medium fast bowler Mohammed Naveed and 111 runs by the batsman Mohammed Shahzad. So, UAE ready to give the toughest match against Sri Lanka on February 25, 2016 (Thursday). 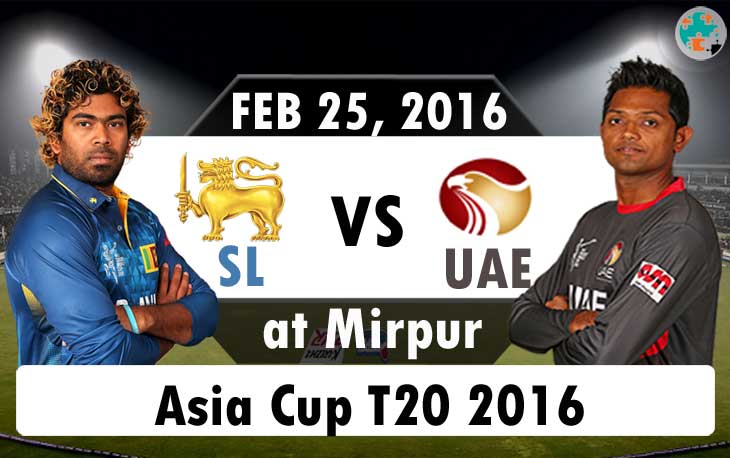 It is one of another opportunity to balance against their spins for the continuous winner, UAE.

UAE will be expected to form the line-up for the batting as Rohan Mustafa, Muhammad Kaleem, Mohammad Shahzad, Shaiman Anwar, and Muhammad Usman. On bowling with the expectations of Saqlain Haider, Ahmed Raza and Qadeer Ahmed.

The team, Sri Lanka gives their first entry to Asia Cup with the new Legspinner Jeffrey Vandersay. So, it may make some surprise for the Sri Lanka Fans. And the team is ready with well-experienced spinner Rangana Herath and Sachithra Senanayake.

Captain Lasith Malinga will play T20 series after three months because of his knee injury.

The expected man from UAE, Rohan Mustafa is looking good in his form. He is a new player of UAE, who can be expected to clash against the opponent team for his team success especially his off-spin.

You can also get score updates in the right side of this blog. Just refresh every time to get updated score.