While at this time, the present big star of Tamil Cinema actor Dhanush’s sister Dr Vimala Geetha has deactivated her Facebook and Twitter accounts after her emotional appeals. She shared her family’s origin and her brother’s hard work. Also, she felt very bad about the technology update on Social media. Because of this technology, her family members have deeply affected for most of the times. Also, her facebook post reads that she quits her facebook and Twitter accounts and she didn’t like to talk with anyone at present. 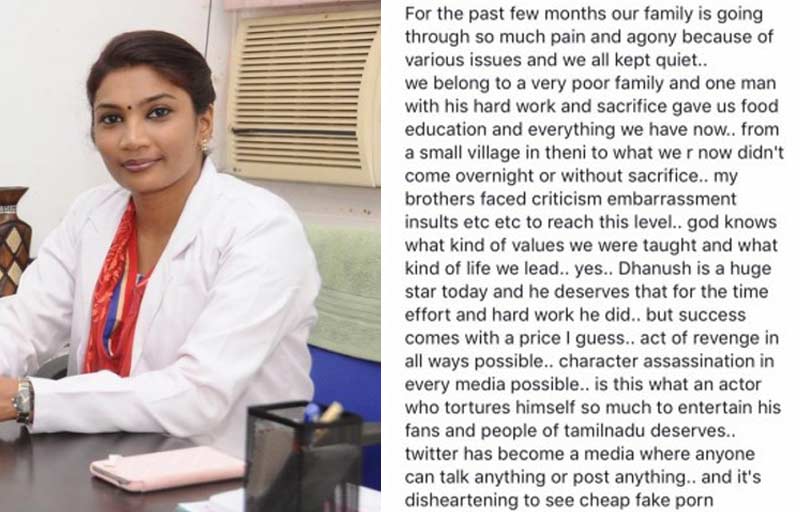 “For the past few months our family is going through so much pain and agony because of various issues and we all kept quiet. We belong to a very poor family and one man with his hard work and sacrifice gave us food education and everything we have now.. from a small village in theni to what we r now didn’t come overnight or without sacrifice.. my brothers faced criticism embarrassment insults etc etc to reach this level.. god knows what kind of values we were taught and what kind of life we lead.. yes.. Dhanush is a huge star today and he deserves that for the time effort and hard work he did.. but success comes with a price I guess.. act of revenge in all ways possible.. character assassination in every media possible.. is this what an actor who tortures himself so much to entertain his fans and people of Tamilnadu deserves.. twitter has become a media where anyone can talk anything or post anything.. and its disheartening to see cheap fake porn videos in a media where even a twelve-year-old have accounts!!! And the worst thing is the number of people who ask for such perverted videos!!! Our family has seen a lot.. whatever comes .. we will stay united and fight…

With great pain and frustration I leave FB and twitter for a while… not in a state to talk to anyone or see anyone… whoever is doing this!!! Stop it… u cannot bring back someone if they go to the extent of killing themselves, particularly women.. Pls live and LET LIVE… god bless and goodbye for a while.”

The Radio Jockey and singer Suchitra claimed that her Twitter account was hacked. But, the photos and the videos are created a lot of damages over Tamil Cinema celebrities. Till now, the social media is busy with the hashtag of #SuchiLeaks and trending worldwide. The hackers are looking another celebrity account to release new photos and videos on upcoming days.