Thaanaa Serndha Koottam: The Upcoming Vignesh Shivan directorial film has produced by the Studio Green. The Production company confirmed the news about the pair of Suriya – Keerthy Suresh yesterday on October 16, 2016. The production company officially twitted about this on their Twitter page at 9 PM on Sunday. The below picture is the official post by the Studio Green. 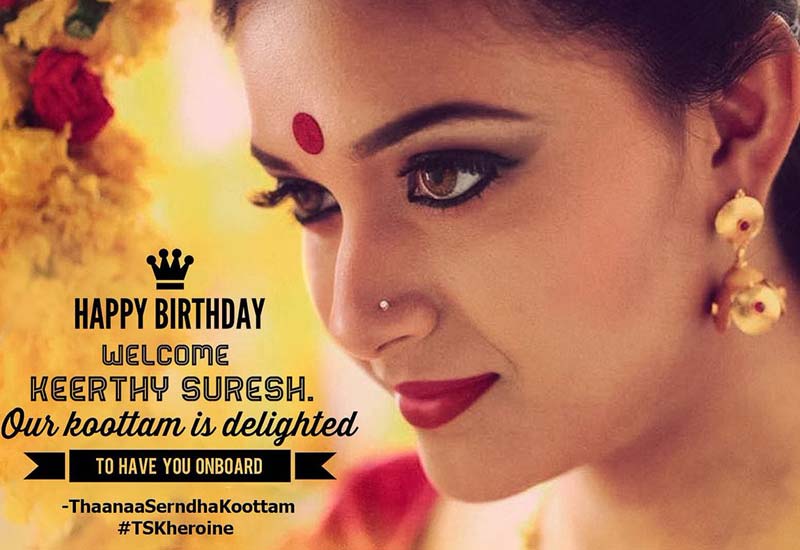 The upcoming New film of actor Suriya, Vignesh Shivan, Anirudh Ravichandran and Studio Green were confirmed by the directer’s Twitter post on September 5, 2016.

After few more days later, the film title has also announced as the Thaanaa Serndha Kottam (TSK). Also, the production company has announced the official Singam 3 release date on September 16. Now, the Pre-booking has started in some theaters.

There has a Talk in Kollywood before this confirmation about the Suriya – Keerthy Suresh tie up for this film. The Studio Green official micro-blogging site announced with the image of Keerthy Suresh. The Image created with the words of Happy Birthday. Welcome Keerthy Suresh. Our Koottam is delighted to have you onboard. -ThaanaaSerndhaKoottam #TSKheroine. Today on October 17 is a day of actress Keerthy Suresh Birthday. She was born in 1992 in Chennai. As of now, she was debuted his Malayalam film as an actress in Geethanjali. After that, she shared her space on Kollywood screen along with the Vikram Prabhu on Idhu Enna Maayam by the AL Vijay’s directorial. The Young cute girl has also signed up with Sivakarthikeyan on Rajini Murugan, Neenu Sailaja (Telugu) and now, the same pair remade the Blockbuster recently via Remo.

She is now busy with Ilayathalapathi Vijay’s Bairava shooting and the Movie will hit the screens world widely from January 2017. The actress also working with the bobby Simha on  Paambhu Sattai.

The complete cast of Thaanaa Serndha Kottam will be updated as soon. As of now, it is confirmed that the lead male role is Surya and the lead female is Keerthy Suresh on TSK.