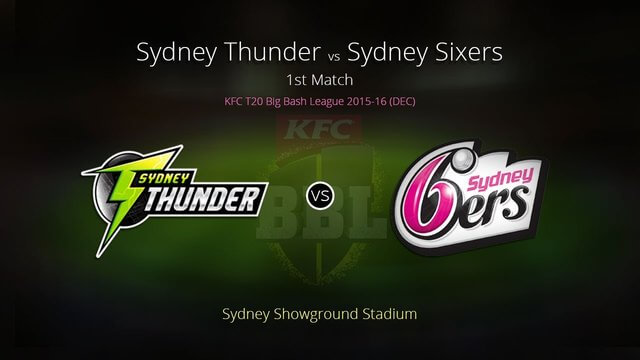 Big Bash League 2016-17’s Match 1 will again open with Sydney Thunder and Sixers take to each other the opening match today. Australian all-rounder Shane Watson will not be a part of the Thunder Playing XI against Sixers Match of 20th December due to injuries. In absence skipper, Sydney Thunder will be lead by the Ben Rohrer for this First Game. Pace bowler Pat Cummins is declared fit and will be playing in the opening game against Sixers.

On the other part, Sixers looks stronger with overseas players like Henriques, Bilings, Botha, Haddin, O’Keefe, Jason Roy and Bolinger in the team. The team will be lead by Moises Henriques.

Players to Watch in this Match

Cricket Fans can watch Sydney Thunder vs Sydney Sixers playing live from their Home Television system from the following TV channels listed below.

Local Audience of Australia can the game between Thunder vs Sixers live on Ten Network and Fox sports TV channel/ The live updates of SYS vs SYT will be available on Cricket Australia official websites of www.cricket.com.au.

Canada and United States (US) can watch this T20 Match live action on NBCSN TV channels while live streaming available in the USA on NBCSports.com.

You can also get Live Score Updates at CricBuzz.com.