Thirunaal Movie Review: The Ambasamudram Ambani fame director took his village centric drama with the pair of Jiiva – Nayanthara. After the film ‘E’ which has directed by S P Jananathan (National Award Winner in 2004), the Kollywood Tamil audience seen Jiiva & Nayanthara on screen as a pair. Yes..! It is the second film for these two people were appearing on a screen today on August 5, 2016. The Audio of this film has released on March 26, 2016. All the six tracks have a good response till today. In this Friday weekend, Jiiva – Nayanthara couple is competing with Mohanlal – Gouthami’s Namadhu. Read the Thirunaal movie Review, Rating, Story Verdict here on our website. 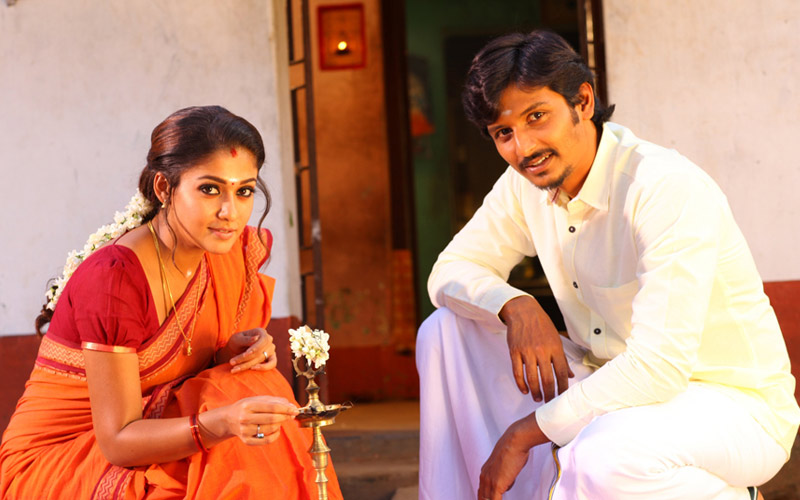 Here we covered the Movie Review as how all the departments were done their work such as Cinematography, Editing, Music, Screenplay, Choreography and more. Each and every film had the editorial department and it is most important one in the crew. In this film, V. T. Vijayan and T. S. Jay has shared their works as the editors of this film. Based on the screen presence, we didn’t find any mistake on it. Srikanth Deva came into the Tamil film industry in the year 2000. He gave most number of good music and here also, he delivered energetic tunes based on the character of Jiiva in this film and the background score is matched correctly with all the action and emotional love scenes. Check out the Thirunaal Movie Songs here

The Cinematographer Mahesh Muthuswami has worked along with his camera lens and presented an eye-catching frame. Most of the picturesque locations are there in this Movie to celebrate the Theater hall. Most of the scenes were shooted in Kumbakonam. Mahesh Muthuswami has done cinematography which impress everyone looking at each frame. The Art department has handled by the Seenu Rao. Kosdhandapani Films encourage the filmmaker with the support of financial corner. Share your thoughts about our Thirunaal movie Review in the below comment box. Also, stay tuned for Thirunaal Box Office Collection report. We will share with you.

The Story covered the Political and a Normal people base. And it fully happens in the place of Kumbakonam, and Thanjavur (Tanjore) in Tamil Nadu. Blade Ganesh (Jiiva) performed as a Local guy and fall in love with Vidya (Nayanthara). In between these scenes, A.S.P. Pugazhenthi (Gopinath) joined this team and tried to control all the misbehaviors around the city. One of the Group targeted Blade Ganesh to murder and police team on another side. How Ganesh will be escaped, how he solved all the problem and married his Girl is the Thirunaal Movie Story.