Tamilnadu Legislative Assembly on 18th February assembled to floor test and prove EK Palanisamy strength to rule Tamilnadu after OPS resignment couple of weeks. TN assembly was postponed at 1 PM after DMK’s act on the speaker, Mic’s and chairs were broken inside the assembly. When no TV’s are allowed to cover live of the floor test, Jaya TV telecasted the video of DMK MLA’s act on the speaker. The speaker Dhanapal ordered the bodyguards of the Assembly to take DMK MLA’s outside. DMK team refused and assembly postponed again to 3 PM.

Floor test live updates are not covered by any TV channels whereas some websites are covering live text updates as this is the most important and turning point day in TN politics. Floor test has been called after 29 years in TN political history. So people are very keen on looking at TN Assembly Floor Test result. 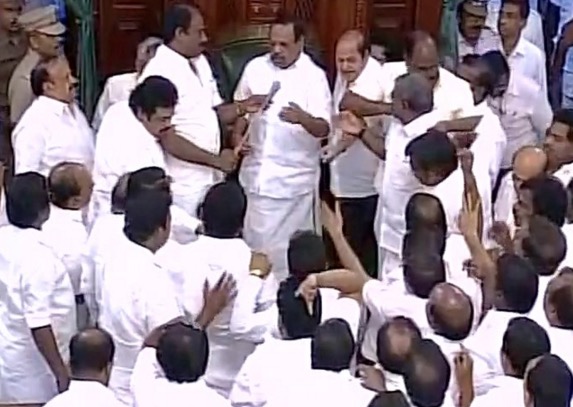 According to some trusted source, it is a news that floor test will be postponed to the other day due to the issue. But we need to wait till 4 PM to confirm this news. OPS team and DMK are asking for the secret ballot and the speaker refused to do so which caused big issue in the morning session of TN assembly and brought many issues in the floor test.