After 28 years, Tamilnadu Politics meets Floor Test in its Assembly. EK Palanisamy will face floor test at 11 AM today. It is already confirmed by Stalin that DMK MLA’s will vote against current ruling party AIADMK and Palanisamy yesterday evening in a press meet. Tamilnadu Congress also confirmed, they will vote against the ruling government this morning. So EPS have 122 MLA’s in his team which is more than enough as only 116 needed to win the floor test assembly.

Live updates of TN assembly Floor Test results will be updated on this page. Earlier today, DMK leaders had some harsh talks to the police while entering into the assembly with their vehicles and the police had heavy checking which disappointed them. AIADMK MLA’s already reached the assembly whereas DMK MLA’s are in discussions before making their vote. Since Jayalalitha was dead, her place will be vacant in the assembly. 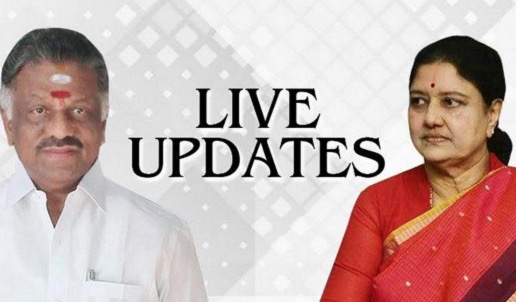 3:25 PM: Edapadi Palanysamy announced as Floor test winner in TN assembly and he will be the CM of Tamilnadu.

3:20 PM: MK Stalin meets the TN Governor to explain the issues happening in the assembly and the floor test.

3:10 PM: Congress walks out of Assembly.

1:45 PM: koovathur resort is set to be closed, MLAs will have to be vacated from resort!

11:50 AM: Nobody can interfere in my decision on how to vote: Tamil Nadu assembly Speaker P Dhanapal

11:45 AM: MLA’s should be allowed to go to their constituencies and come back to vote for the Confidence Motion – Thiru O.Panneerselvam

11:35 AM: Why this hurry to conduct floortest on today though governor gave 15 days time?they would’ve been threatened at the kuvathur resort and they will be made to vote their side. – MK Stalin to the Speaker.

UPDATE: No live telecast and no audio feed. So don’t believe the posts comes in social media.

11:25 AM: Each block has 38 MLAs. First 3 block expected to be of EPS Camp. Ruckes continues. #TNAssembly

11:20 AM: Speaker Dhanabal rejects the demand for secret ballot

11:18 AM: Arguments break out between media persons and Police after Police denies media entry into TN assembly premises.

11:00 AM: The speaker Dhanapal started the assembly.

10:55 AM: Trust vote in TN assembly at 11 AM. There will be no live telecast and no mobile phones allowed inside. 29 years ago, similar trust vote was taken.

10:52 AM: DMK Leader Karunanidhi will not participate in the Floor Test.

Will Edappadi Palanisamy win the TN Floor Test? The Result will be announced in few minutes from 11 AM. Stay tuned for live trust vote result in Chennai.