The South America toppers, Brazil and Uruguay are facing each other in the FIFA World Cup 2018 qualifiers from the CONMEBOL confederation on Thursday. All the teams have played 12 games already, the remaining six matches are there to play.

In the last year, the Brazil and Uruguay had a drew match in their first leg of the World Cup qualifier. For Brazil, the Renato Augusto and Douglas Costa have scored, while Luis Suarez and Edinson Cavani found the net for their side, Uruguay.

In this second leg match of Brazil vs Uruguay, the Football Club Barcelona star Suarez and Brazil’s Costa will be out for today’s action, both of them to suspension and injury respectively.

The Brazil has won the game by three goals difference between the Uruguay’s one goal. The Final result score (Full Time) is Uruguay 1-4 Brazil. 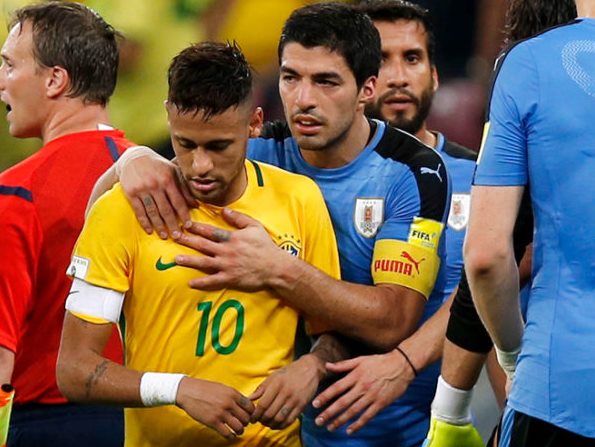 Listen to the Live Commentary of Uruguay vs Brazil Fifa Worldcup qualifier on BBC Radio 5 Live.

Both of the teams have played each other as many time since 1959. According to the last five matches, the Brazil had their four winning games and the Uruguay had only one out of last five games. The last match against each other on 26th March 2016, the game tied with the two goals as each.

The Uruguay had their winning games as three times in the last five. Also, the team felt with a drawn to Colombia in the World Cup qualifier on October 2016. On the most recent game of Uruguay against Chile was ended with the result of the loss, 3-1.

Brazil didn’t face the losing games in the last five meetings against Bolivia, Venezuela, Argentina, Peru, and Colombia. However, the Brazil have won seven matches consecutively after the loss against to the Peru. Out of last 20 games, the Brazil had only three losing and four draws.