Vivegam Track list has been announced by the Sony Music south whom bagged the Vivegam music rights. Thala Ajith’s Vivegam contains totally seven tracks including Surviva, Thalai Viduthalai, and Kadhalaada. The makers have already released three singles from the film in different dates. While the film completed censor process and also decided the release date of the film.

Thala Ajith’s Vivegam Audio will be released officially on the stores and digital platforms on August 7 (Monday). While the Vivegam album preview was already released on August 3 Thursday with all track list. 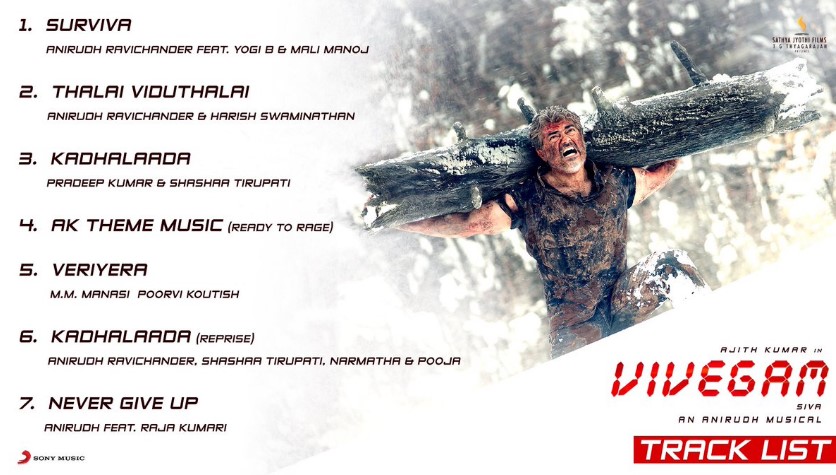 Anirudh Ravichander is the music composer of the film. Apart from three songs which already released on digital platform, the album also has a theme track titled AK Theme music (Ready to Rage), Kaadhalada reprise sung by Anirudh, Shaasha Tirupathi, Pooja and Namratha, Never Give Up sung by Anirudh with Rajakumari and Veriyera by MM Manasi and Poorvi Koutish.

This is the first time in the Kollywood that a film released the album promo in video format, early the preview of albums was released in iTunes in audio format only.

This new way is attracting fans to listen the music. If the maker faced their goal, then all other films in Kollywood would follow this same formula for few days until the next idea.

T.G.Thyagarajan is the producer of the film who created this under the banner of Sathya Jyothi Films. G Saravanan is the co producer of this film. Siva’s directional film have the cast of Ajith Kumar, Vivek Oberoi, Kajal Agarwal, Akshara Hassan & Others.

Vetri is the cinematographer and Ruben handled editing. Anirudh Ravichander will be the hero of August 7th Monday, he is the music director. Milan is the art director of Ajith’s Vivegam. Kabilan Vairamuthu, Vivekha, Yogi B, Siva and Raja Kumari are the lyric writers of this film.