The Force 2 Official Posters has frequently released on the official Twitter page. The Official Force 2 Trailer has been released just now and getting viral on the Internet. Watch the John Abraham and Sonakshi Sinha’s Force 2 Trailer Here. The Viacom18 Motion Pictures released the Trailer Today on September 29 afternoon. 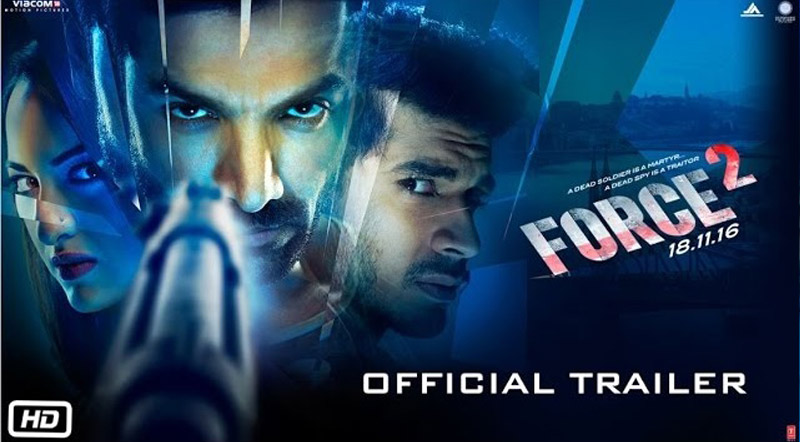 John Abraham and Sonakshi Sinha’s Force 2 will hit the theater screens from 18th November 2016. The 2011 Force movie is the base to creating this Force 2. Nishikanth Kamath directorial film got the massive response by the audience, also bagged the dollars and made a record in 2011. The sequel movie, Abhinay Deo’s Force 2 will ready to beat all the previous record. The Vipul Amrutlal Shah helped as a financial supporter of this film under his banner of Sunshine Pictures. Tahir Raj Bhasin and Paras Arora are also there in this film in crucial roles.

The Force 2 Trailer has 3 minutes and 5 seconds run time with the full-fledged action blocks and twists. The AR Murugadoss favorite Bollywood actress Akira ‘Sonakshi Simha’ is back to the action again in this year itself with this movie. John Abraham is continuing his second sequel of Force this year as an ACP Yashwardhan. Both of them playing as a government RAW agent. Sonakshi is named as ‘KK’ and the Tahir Raj Bhasin as an antagonist in this film.

The Force 2 Trailer begins with the quote line as “Dedicated to the Heroes who sacrificed their lives for the country and yet remained unnamed and unrecognized.” So, the film is fully based on the Nation production.

The Trailer ends with the scene of John lifting a Car. There are words on social media as he was lifted 1580 kg Mercedes-Benz for this movie. Early, he lifted a 150 Kg bike in Force 2011 movie.

As mentioned above, all three lead roles have released their First look posters yesterday on their official Twitter account. The Movie poster had the tagline as “The R.A.W. truth… A dead soldier is a martyr… A dead spy is a traitor.”

The frequent promotions made a big expectation about this new movie over the nation today. The move, Force 2 will release on November 18.