Watch Kodi Trailer: Actor Dhanush has completed his R. S. Durai Senthilkumar’s film named as “Kodi.” The film music has composed by the Santhosh Narayanan. His fans are shortly called him as ‘SaNa.’ The Kodi Audio has launched today on official I tunes and YouTube channel. The movie team conducted the press meet today and announced the trailer release time and date. Also, the actor Dhanush tweeted the Trailer release time along with the Kodi Audio Songs Lyrics Video Playlist YouTube link. Watch the Kodi Lyrics Video songs Here. Scroll down and Watch the Kodi Trailer. 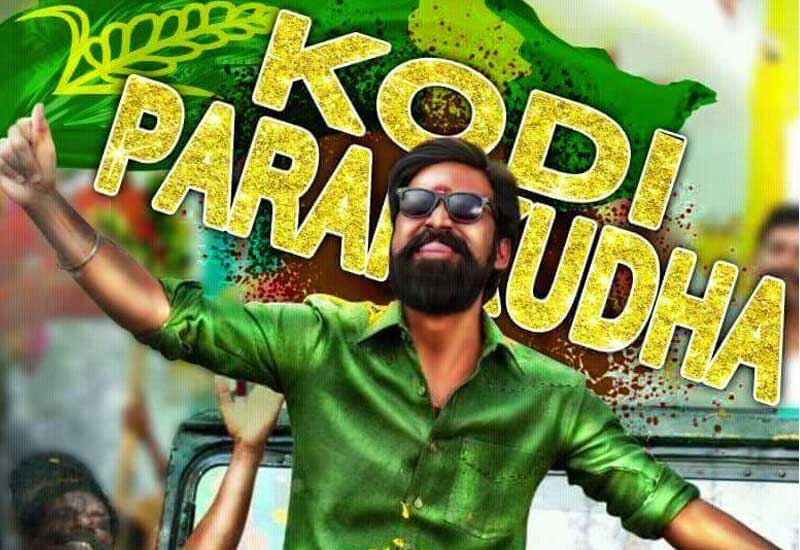 The Political centralized Dhanush Movie has directed by the R. S. Durai Senthilkumar, who directed SivaKarthikeyan’s Ethir Neechal and Kakki Sattai. This movie has produced by the director Vetrimaaran under his production banner of Grass Root Film Company. It is the first film for Dhanush in his cinema career as to appear on the screen with the dual role. One of the Character is named as Anbu, he is a Professor and another one character is the Kodi as Politician. The fans can get the characters face identification easily on the recently released posters. The above picturised Dhanush is the Politician and the another one is Professor, who looks like the character in Thanga Magan. Actor Dhanush tweeted the Kodi Trailer release Time on his Twitter account early morning of October 5 along with the YouTube Playlist of Kodi Lyrics Video Songs.

This film has lensed by the Venkatesh S and the movie edited by Prakash Mabbu. And the film will be released on the Diwali festival in 27th October 2016 by the distributor of Escape Artists Motion Pictures.

It is the first film for Premam fame Anupama Parameswaran in the Kollywood industry. Trisha is one of the lead actresses of this film. Her last bilingual film failed to succeed in the Box Office collection. She was acted in the Horror film without any famous lead male and she tried to show that film by her own way. Also, most of the reports said that she lost her hope in Tamil industry even acted with Dhanush in Kodi.