Success stories of people who worked day in and day out to make it to the top are a great source of inspiration. Sundeep Kochar, one of the most popular and internationally renowned celebrity astrologers comes across as a man who started off from the scratch and worked all the way up to become what he is today. He happens to be the first Indian Astrologer who has had the honour of sharing his life story on TED Talks.

Enlightening the audience with his views on astrology, Sundeep Kochar also talked about the ABCD (alive, birth, choice and destiny) of life. Sundeep Kochar is well-known for his accuracy and precision in the astrology circuit. He also has a rich work experience as a motivational speaker, Vastu consultant, TV host, film actor, life coach, anchor and an author.

Incidents of his adolescence show how his unprecedented passion and soaring ambitions helped this middle-class boy in climbing his way to the top. 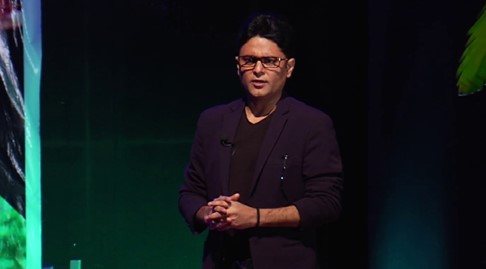 “If you ask me what is the purpose of astrology, I would say it is to help people plan their lives,” quips the maverick astrologer. Furthermore, Dr Kochar recounted his life experiences and expressed them eloquently with the audience.

Hailing from the small town of Shahjahanpur in Uttar Pradesh, Sundeep Kochar always harboured a dream of doing something big in life. His passion for cricket and extraordinary bowling skills earned him a place in the Bangalore United Cricket Club (BUCC), where he got an opportunity to play with some of the greatest players like Rahul Dravid. Back in the 90s, his talent even caught the attention of legendary players like Anil Kumble.

What proved to be a turning point in the life of Sundeep Kochar was the untimely demise of his father.  Shouldering the responsibilities of his younger siblings, his passion for cricket took a backseat in his life. This was the time when he realized that astrology is his calling in life.

With an unpresented zeal to excel, Sundeep Kochar embarked on his journey to make astrology his career. Today, he is well-acknowledged for his expertise in the field. Dr Kochar is also the first astrologer to be registered in the limca book of records for hosting the longest running show ever.

Based on almost two decades of experience in astrology and human psychology, Sundeep Kochar sums it with the belief that — it’s all in the mind.  “You become what you think,” he says.

Sundeep Kochar deems happiness to be the only and ultimate purpose of life. He emphasized upon the importance of having a dream in life. “Dream big, those who dream the most… do the most in life,” stated Dr Kochar.

What is UAN and what you need to know about it?