Amazon Chime uses AWS which is already the best player in cloud services. After a few hours of the Amazon Chime App launch, loads of people started installing from the Play Store and iOS App Store. It is also getting good reviews worldwide, but Android users are still facing some bugs earlier while creating accounts. Hopefully, it will be fixed soon. 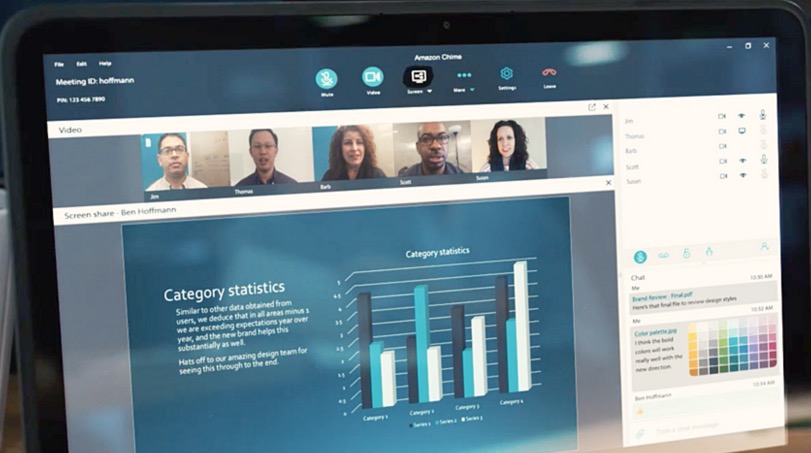 Chime App is free to use with some restrictions, and there are paid plans that users can select depending upon their needs. Amazon Chime Basic plan is free, but it allows Video calls for up to 2 people Chat & chat rooms. Other Amazon Chime Pricing plans are Plus and Pro plans. Chime Plus costs $2.50 per month with basic plan features and an extra Screen Sharing feature. Chime Pro plan costs $15 per month, it has all the features in basic and plus plans with extra features, Video meetings for up to 100 people and Personal meeting URLs.

In Chime Basic plan, users can see 30 days message history, whereas Plus and Pro plans allow up to 1GB/user. Check full features of Amazon Chime plans.

The advantage of Chime App is Audio is too clear, and better than any communication app. And what people will love is the simplicity of UI—expecting more features in upcoming upgrades. But users need to use their Amazon account to access the Chime App. This is not the best way to access the app. If Amazon can bring an update to sign up with any email, that will be a great feature to get more business users.

Chime App has not been released for Linux officially. It will be released in the next few weeks.

If you're looking for a new way to communicate with colleagues and clients, you should try Amazon Chime. Amazon Chime is a free communication service offering video and audio calls, chat, and file sharing. Amazon Chime is easy to use and works on any device. You can start using Amazon Chime for free today. AWS offers the Amazon Chime Pro plan free for 30 days, with no need for any credit or debit cards. After 30 days, if you like the app, you can use a pro feature, or it will be turned into the basic plan, and you can still use the free Chime plan.